Victoria has a reputation for being one of the environmentally progressive states in Australia. Not surprisingly, it has the third largest installed capacity for solar photovoltaic systems, with Melbourne taking centre stage in some of Australia’s most progressive sustainable buildings projects.

Over the last 18 months, Enphase has worked on the Five x Four Project, an iconic four storey residential project in East Melbourne, Victoria, that is only twenty square metres in size.

The project sets a new precedent for the design and running of a sustainable home in Australia, as it considers the full lifecycle of a building’s development, from the design and use of materials to its day-to-day operations. It was modelled on a minimal life-cycle energy and One Planet Living approach, which has a commitment to enable a building’s occupants to monitor their ecological footprint and adapt their behaviour to minimise their impact on the environment.

The Five x Four Project is a four kilowatt installation specially designed to maximise the utilisation of solar power from panels affixed onto the roof and one side of the building. This split design of the solar system was made possible by using 15 Enphase M250 Microinverters attached behind individual solar panels to maintain the building’s aesthetics.

Five x Four currently exports approximately 20 per cent of the power generated by its solar system to the grid. With the Australian rollout of the Enphase Home Energy Solution in Winter 2016, Enphase will provide an Enphase AC Battery that will allow the owner of Five x Four to store solar power generated for use at night, saving even more money. In 2016, Five x Four will be fitted with the Enphase Envoy-S Metered communications gateway, which provides both generation and consumption monitoring. You can view the live production of energy for the Five x Four Project here.

Project owner Ralph Alphonso qualified Enphase through a rigorous process to identify the right energy solution for his home. He said, “One of the key criteria in looking at different inverter offerings for Five x Four was determining the embodied energy that was used in the products. Enphase was the only inverter company taking action to understand its embodied energy, and the Enphase Enlighten Software was a great way to educate and engage people about the potential for renewable energy.”

From November 5th-10th, the Five x Four Project will feature on Grand Designs Australia, a lifestyle television program that showcases some of Australia’s most uniquely designed urban homes. 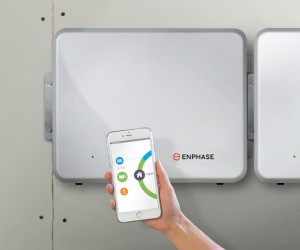 Enphase Energy, a global energy technology company, is leading the charge to bring smart, connected solar energy to every home, business and community. The company delivers simple, innovative and reliable energy management solutions that advance the worldwide potential of renewable energy. Enphase has shipped approximately 12 million microinverters, and over 500,000 Enphase residential and commercial systems have been deployed in more than 95 countries.

Sending a message to Enphase