As governments work to create safer public spaces in a COVID-19-affected world; two much-celebrated Sydney projects have been shortlisted in the world’s most extensive architecture awards program – being recognised internationally for their contribution to the community and environment.

Among a select cohort of international projects declared finalists in the 2020 Architizer A+ Awards last week were Sydney Park Water Re-use Project, a public park integrating water infrastructure on one of Sydney’s oldest post-industrial wasteland, and Central Park Public Domain, transforming a derelict brewery site into one of the city’s most successful precincts.

Led by Australian-based landscape architects and urbanists Turf Design Studio, with Sydney Park Water Re-use Project undertaken in collaboration with Environmental Partnership and Central Park Public Domain in partnership with Jeppe Aagaard Andersen. Both projects are among only five shortlisted projects in their categories and are in the running for People’s Choice Awards. Sydney Park is one of five finalists in Architizer’s Architecture + Water awards category and Central Park in the program’s Urban & Masterplans category.

This year’s Architizer A+ Awards focuses on issues defining the future of architecture. New awards celebrate sustainable design and new approaches to building. These include collaborative categories like Architecture +Adaptive Re-use and Architecture +Water, which illustrate the changing demands of the industry today.

“The project highlights the benefit of significant design team collaboration, successfully bringing together water sensitive urban design, new interconnecting civil infrastructure, environmental bio-retention and a local urban water re-use system,” Mike said. “We aimed to exemplify the urban design benefits that can be delivered from strategies such as Sustainable Sydney 2030 and the Sydney Green Grid.”

Previously commending the Sydney Park project, City of Sydney Lord Mayor Clover Moore has said: “I heartily commend Turf Design Studio for its outstanding work on the Sydney Park Water Re-Use Project. This project has realised the city’s stormwater harvesting objectives for Sydney Park, making a major contribution to the City’s Sustainable Sydney 2030 local water capture and re-use targets. As co-head consultants, Turf Design Studio and Environmental Partnership have transformed the park, literally bringing the wetlands and the story of water treatment to life in the park’s ecosystems and the community’s imagination. Through the chain of wetlands, connected by weirs, bridges, paths and stepping stones, the designers have created delightful places in the park’s landscape, connecting community and nature.”

Turf Design Studio was also lauded for the creation of Central Park as a welcoming place in which to replenish the spirit, with the project showcased by the NSW Government as a case study exemplar.

“As landscape architects, we feel it’s important to do what we can to create meaningful, beautiful, accessible and safe spaces that allow locals to have a communal backyard,” Mike said.

“A place where we can still throw a ball, run with the dog, play some sports; all the things we want to do need to be still done in a shared environment. In the current circumstances, the ability to indulge safely in these simple pleasures has never been more critical.”

“Governments, developers, architects and landscape architects among others need to work together to ensure we can design the very best community spaces going forward – precincts that both nurture, enhance and protect the community.”

The project is an integral component of City of Sydney’s Sustainable Sydney 2030, which aims to replace 30 per cent of 2030 potable water demand. The park now captures and cleans 850 million litres of stormwater a year, making it available for re-use. At the same time, the reinvigorated park provides much-needed open space for relaxation and recreation in this high-density inner-city neighbourhood.

Native animal habitat was carefully considered and improved, with the wetlands now boasting the highest population of native bird species in the local area, including 22 wetland species.

The project was funded by the City of Sydney and built in partnership with the Australian Government through the National Urban Water and Desalination Plan. The design team incorporated multidisciplinary specialists led by landscape architects Turf Design Studio and Environmental Partnership. The team’s expertise included hydrology, soils, ecology, engineering, and public art, as well as landscape design. The collaboration was central to the design process with the project also showcased by the NSW Government as a case study exemplar.

Turf Design Studio with Jeppe Aagaard Andersen was commissioned by Frasers Property to reimagine the public domain of the Carlton United Brewery site at Broadway in Chippendale.

“The site offered immense possibilities. At the heart was the former C&U Brewery, surrounded by a built fabric of some of Sydney’s oldest workers’ cottages, terraces and warehouses. From here we conceived an expanded and interconnected network of new places – streets, lanes, parks and plazas; each unique yet forming a whole greater than the sum of its parts. A plan that both unites the site and restitches the city. At its centre is Chippendale Green; a north-facing park of terraced, sun-drenched lawns tucked away from the frenetic pace of the city,” Mike said.

“A large public park was always central to the masterplan intent. Orientating the park’s long axis with the frontage of existing Chippendale terraces proved vital in creating a place of meaning and connectedness for the community. Set back from Broadway, the park is creating an intimacy rarely achieved by a park of this size within a CBD. Since opening, Central Park has become a much-loved new addition to city life. From the everyday dog walk or yoga class to markets and numerous annual major events, Central Park has been embraced by the community at all levels. It’s especially important for our emotional well-being right now during this pandemic.” 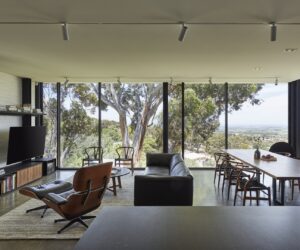