Gen-Y House, part of White Gum Valley in Perth, one of the CRCLCL’s 16 Living Labs across Australia. Photography: Robert Frith A comedian with a passion for design, an architect duo who have led a movement of architect-designed social housing and community-focused projects, and a sustainability research centre fuelling innovation have been honoured with National Prizes from the Australian Institute of Architects at the 2019 National Architecture Conference.

The pair was commended for their inclusive design approach that has raised the bar for the design of buildings particularly for marginalised people and programs.

As architects, they forged a path for future generations of designers to see the potential of architecture as a social medium.

‘The legacy of their projects lies not just in the bricks and mortar of the buildings themselves, but also in the hearts and minds of all those involved in making sure the lessons learnt extend beyond the property boundaries,’ the jury citation said.

The National President’s Prize was awarded to entertainer and broadcaster Tim Ross, who has propelled Australian design – notably modernism and its protection – into the popular media.

Ross had a prominent role in campaigns to stop the destruction of heritage landmarks, Save Our Sirius and Hands Off Anzac Hall, and continues to advocate for Australian architecture and design.

Immediate Past National President Clare Cousins said Ross was one of the industry’s champions.

“A comedian, self-proclaimed design nerd, broadcaster and entertainer, Tim is one of our industry’s most passionate activists and champions. Not only has he raised the profile of heritage and design in general, he also promotes Australian architecture in his unique voice in popular culture,” she said.

The Leadership in Sustainability Prize was awarded to Cooperative Research Centre for Low Carbon Living, which creates collaborations between property, planning, engineering and policy organisations with researchers aimed at spurring sustainability in the development and construction industries.

“The Cooperative Research Centre for Low Carbon Living has been one of Australia’s pivotal research and innovation hubs, focused on driving our sector towards not only more sustainable development, but also a globally competitive low-carbon future,” the jury citation said.

National President Helen Lochhead was awarded the Paula Whitman Leadership in Gender Equity Prize for her commitment to women’s participation and sustained contribution in the industry.

As the first female Dean of the Faculty of the Built Environment at the University of New South Wales, she has achieved a goal of 50 per cent representation of women on the leadership team and advisory council.

“Combining her teaching, research, practice and advisory roles, Helen uses her profile to facilitate education opportunities for women in architecture, including establishing scholarships and prizes, and supporting mentoring programs and work placements,” the jury said.

“Her teaching and research have converged seamlessly with an ideas-led architectural practice and been deeply informed by her own personal explorations in design,” the citation said.

The Student Prize for the Advancement of Architecture was awarded to Bobbie Bayley and Owen Kelly for their Grand Section project traversing Australia on bicycle, discussing architecture and design with communities along the 7600-kilometre journey.

Julius Egan received a Commendation for his work at RMIT in student engagement.

A proposal from Sobi Slingsby for a group of land-based and over-water architectural shelters on the Great Barrier Reef’s Lady Elliot Island as a response to climate change was awarded with the BlueScope Steel Glenn Murcutt Student Prize.

Student Prize for the Advancement of Architecture The Festival of Architecture and Design 2019 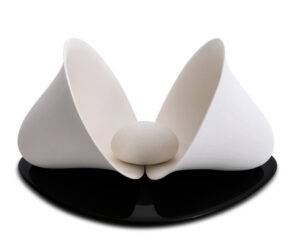