Visitors are invited to walk upon more than 2000 maraong manaóuwi/broad arrow designs and contribute to the artwork’s slow disintegration as the stones gradually mix together. On view from 21 February – 15 March, the installation is jointly presented by Sydney Living Museums for the official reopening of Hyde Park Barracks and the City of Sydney as part of its year-round public program Art & About.

Jones has curated a robust public program of performances, talks, workshops and live music designed to activate the work by creating a living, cultural memory and encouraging discussion and debate while also accelerating the artwork’s destruction. Notable participants include Marcia Langton AM, Wesley Enoch, Lorena Allam and Lorraine Connelly-Northey and Eric Avery.

Lord Mayor of Sydney, Clover Moore, said: “Temporary public art plays an important role in the life of a city, asking Sydneysiders and visitors to engage with locations in new ways or to consider new ideas and perspectives. Through untitled (maraong manaóuwi), Jonathan Jones has not only brought us a stunning and thought-provoking artwork, he has put together a fantastic free public program of performances, talks and workshops that I encourage you to engage with.”

Executive Director of Sydney Living Museums, Adam Lindsay, said: “Hyde Park Barracks has a complex history that affected many people beyond those who inhabited the building. We are reminded through this artwork, that history can be told and understood from many perspectives. The temporary nature of Jonathan Jones’ work untitled (maraong manaóuwi), will undoubtedly leave a permanent mark on the cultural memory of those who come to experience it.”

Further details of the program:

Late Nights at the barracks: understanding the voice

Lawyer and Indigenous rights advocate Danny Gilbert AM will host three consecutive evenings of discussion and debate focusing on the Uluru Statement from the Heart, the Voice to Parliament, the process of Makarrata or truth-telling, and the ways we can move forward together as a nation. There will also be live music performances, an artist talk by Jonathan Jones, food, and the Brix pop-up rum bar. Tickets can also be purchased to experience Hyde Park Barracks at night.

Wednesday 26 February. SpeakerProfessor Marcia Langton AM is a Yiman and Bidjara academic of political and legal anthropology, Indigenous engagement with the minerals industry, and Indigenous culture. She is Associate Provost at University of Melbourne.

Wednesday 4 March. SpeakerProfessor Larissa Behrendt is a Eualeyai/Kamilaroi barrister and award-winning author. She is the Professor of Law and Director of Research at the Jumbunna Indigenous House of Learning at the University of Technology Sydney.

Wednesday 11 March. Speaker Professor Megan Davis is a Cobble Cobble constitutional lawyer who researches in public law. She worked closely on the Uluru Statement from the Heart and is the Pro Vice-Chancellor Indigenous at the University of New South Wales.

In this special series of talks in association with untitled (maraong manaóuwi), Jonathan Jones invites leading Indigenous and non-Indigenous Australians to discuss the themes and issues raised by the artwork.

Special guest: Dr John Maynard, Worimi historian and Professor of Indigenous Education and Research at the University of Newcastle

Special guest: Lauren Booker, a Dharug and Japanese researcher at the University of Technology Sydney focusing on provenance, repatriation and issues of archival preservation

Special guest: Professor Heidi Norman, a Gamilaroi researcher at the University of Technology Sydney in the field of Australian Aboriginal political history

Special guest: Dr Jeanine Leane, a Wiradjuri writer, teacher and academic at the University of Melbourne

Special guest: Aunty Glendra Stubbs, a Wiradjuri elder who has worked to address the lasting impact of the removal of Aboriginal children from their families; elder in residence at the University of Technology Sydney

untitled (maraong manaóuwi) marries the two symbols of the emu footprint and the English broad arrow. Workshop participants are invited to make their own mark on Hyde Park Barracks site, using stamps and historical images to create an artwork that reveals Sydney’s built environment and history.

Cheryl Davison is a Walbunja and Ngarigo storyteller and artist with connections to the Wallaga Lake Aboriginal community on NSW’s south coast. In this workshop, Cheryl will share her family’s histories and explore the use of symbols and designs to tell stories of Country.

Saturday 29 February and Sunday 1 March
Wiradjuri/Kamilaroi artist and educator Sharron Lindh will share an engaging performance with her special friend Dinawan (emu). Sing along with Sharron as she shares her story and the significance of the emu in Indigenous culture. For her workshop, Sharron will demonstrate how the emu’s beautiful feathers are used to create pieces that adorn the body.

Shannon Foster is a local Sydney D’harawal knowledge keeper and artist with family connections across the Sydney region including the local Aboriginal community of La Perouse. Shannon will share the stories and weaving techniques of Sydney Saltwater Country that have been passed down through her family over thousands of years. In this workshop, participants will make their very own woven emu footprint whilst hearing the stories of the world’s oldest and longest surviving culture.

Special closing event
Sunday 15 March, from 2pm
NAISDA Dance College will lead a mass workshop and public performance of a contemporary emu dance. This performance will involve the final destruction of untitled (maraong manaóuwi) by mixing the stones, leaving the artwork as a memory forever connected to the site. 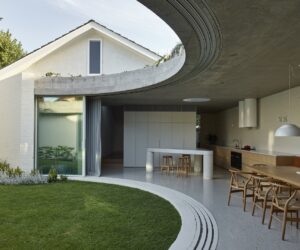