INVERT 2.0 MINI LIVING – BUILT BY ALL is the second collaboration between green magazine, MINI LIVING, the City of Melbourne and RMIT, in the form of an exhibition and talk series which will be presented in October 2018. This year we’re exploring multi-residential design and development, a subject of increasing architectural focus in recent times. In the lead-up, we’re taking a look at a number of exemplary local and international multi-res projects that are paving the way. In this instalment, we’re featuring Nakagin Capsule Tower, a project nominated by Chris Connell Design.

Designed by architect Kisho Kurokawa, Nakagin Capsule Tower is a mixed-use residential and office tower located in Shimbashi, Tokyo. The arrestingly futuristic edifice harks back to a Japanese architectural movement known as ‘Metabolism’, which rose to prominence in the post-war period and was concerned with developing megastructures that referenced organic biological growth.

This unorthodox mandate undoubtedly incited Kisho Kurokawa to experiment with prefabricated construction techniques in 1972. The building’s 140 capsules were hung by a crane onto concrete towers, the interiors of which were preassembled in an off-site factory. This process was so efficient, construction was reportedly finished in merely 30 days.

Installed complete with appliances and furniture, each capsule measures 2.5 metres by 4.0 metres, with a 1.3 metre diameter window at one end and an aircraft-sized bathroom unit in one corner. While initially marketed to bachelor Tokyo salarymen, the capsules could be adapted to suit family living by connecting the units.

In more recent times, Nakagin Capsule Tower has fallen into a state of disrepair, and its future is uncertain. For now, the tower stands as testament to architectural vision and intrepid design; its indomitable character a challenge to preconceived notions of multi-residential living even generations later.

Embracing multi-res living means parting ways with Australian traditions like single dwellings on quarter-acre blocks. So we asked Chris Connell of Chris Connell Design: How can we make multi-res more attractive to Australians?

“[Including] things like affordability; a feeling of ownership and individual identity; longevity through robust materials yet highly detailed; access to open air and green space.”

Stay tuned for more MINI Profiles as part of green magazine, MINI LIVING, the City of Melbourne and RMIT’s INVERT 2.0 MINI LIVING – BUILT BY ALL exhibition. 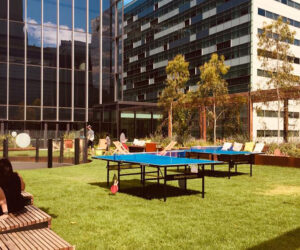