The interior of Branch Studio Architects’ Balnarring Retreat. Concealed within the walls are components that transform the space to serve a range of purposes.

Some Australians have readily embraced the philosophy behind living small. Melbourne-based Branch Studio Architects created one such multi-purpose studio and living space for a client in country Victoria. With its 60-squaremetres of internal space, Balnarring Retreat occupies a small proportion of its block. “This project was not as much about creating additional space as it was about creating a certain type of space, a space very different to the existing house. A quiet, tranquil space for retreat, reflection and creativity,” says Nicholas Russo of Branch Studio Architects.

Each wall of the building has been designed to include components that fold, open and close manually. For example, the south wall contains a foldaway bed, a desk and general storage. The east wall has a series of flaps that unfold and assemble to create a long table. The sunken daybed can be filled with plywood boxes to achieve a consistent floor level, designed to create a larger useable area when hosting bigger gatherings. Balnarring Retreat won an award in the Small Project Architecture category of the 2017 Victorian Architecture Awards. Branch Studio Architects based their design on the notion that, in the process of physically reinventing the space that surrounds them, inhabitants connect on a personal level to the building itself. Russo says that Balnarring Retreat is a celebration of “craftsmanship and integrity of materiality.”

We are proud to have been a part of this project.

To read more about the project, head to Branch Studio. 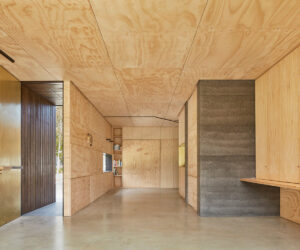 Rammed Earth and the difference it makes.

Olnee Constructions specialises in the construction of rammed earth homes and has been committed to building innovative, architectural, progressive and forward thinking homes for over 30 years.

We are able to facilitate our services throughout the entire building process from design to construction.

Sending a message to Olnee Constructions