The rumpus became a movie room during the first COVID-19 lockdown. Spacious and flexible, the library will offer multiple uses as the family evolves. Soft window furnishings become the line of exposure between the lounge and backyard. The original and new elements of the house connect seamlessly through carefully balanced materiality. Natural green in the kitchen joinery draws the outside landscape in. The prominent rainwater tank is a subtle reminder of the home’s sustainable approach.

Ben Callery Architects overcame an unusual site with a convention-busting design that embraces a family’s flow.

When a bookcase is the hero of a house, it’s a safe bet the owners love words. But this bookcase is more than a careful curation of paperbacks. It’s the central axis around which an entire house interlocks and overlaps, and the key to the way this project achieves more with less.

The owners, publishers Maria Hendriks and Praveen Naidoo, engaged director Ben Callery, of Ben Callery Architects, to restore the front four rooms of their house in Northcote and add a new extension with a backyard for their family of four. They wanted somewhere they could comfortably work or study but still feel connected to the rest of the house and their children.

They were also open to Callery and his team challenging the conventional must-haves for a four-person suburban family brief – a butler’s pantry, ensuite, large laundry and garage – because they couldn’t ‘go up and out’ but rather, ‘go up and back in’.

The main issue was their unusually small, yet double-fronted block. Measuring 395-square-metres, subdivided and shallow from the rear, the site called for a very clever approach with space.

“For starters, there’s no garage,” Callery laughs. Or separate ensuite, for that matter. Two of the existing front rooms remain as bedrooms, while the third is a compact laundry doubling as a hallway to the main bathroom. With a discrete entrance to the main bedroom, the bathroom also moonlights as the ensuite. “It’s quite a challenging thing for some people, but they’ve saved a lot of space,” he says.

It features the semi-transparent bookcase, which peeks through to the adjacent extension. The family can perch by the full-width desk and look into the new living area, connecting with the house on their own terms while feeling semi-secluded to work productively.

“The books are the centre of the house,” Callery says. “And where the clients’ literary passion is celebrated in daily family life.”

The rest of the ground floor extension is open and spacious, comprising the new kitchen, dining and living areas. They flow outside to encourage play and interaction, overlapping and borrowing light from each other to maximise every inch.

For example, concrete floors flow seamlessly from the living space right through into the backyard, which integrates beautifully with the outdoor dining area.

Furthermore, two sides of the house disappear via floor-toceiling glass doors, opening the indoors entirely to the outdoors, and doubling the sense of space from the shortened block.

Even the landscaping is highly detailed with banquette seating around the perimeter maximising space, providing plenty of space for the kids to play.

Upstairs, the cantilevered extension is solid and opaque by contrast. It floats over the rooms below and features a rumpus, two bedrooms for the children and a bathroom.

Again, the bookcase helps to mark the transition into the home’s family zone. The rising treads integrate with the upper shelves at the top of the bookcase, which are filled with an array of colourful children’s books.

Here, the house can be opened and closed, with operable external blinds on all windows for cross-flow ventilation and minimised energy use. The rumpus could become an extra study area as the children grow older, surrounded by leafy views over chimneys, established trees and rooftops that bring the outdoors in.

In a delightful twist on tradition, this house delivers more but doesn’t consume any extra than it needs. And it’s a case study of sustainable living that perfectly reflects its owners today and tomorrow.

Passive energy design
The house is oriented to bring warming northern sun into the living room and study/second living. The first floor overhang provides shelter from hot summer sun to the north and east. The stair is oriented to provide a shaft of north and western sun deep into the into meals room below. Cross ventilation is a key design strategy with multiple openable windows on opposite sides of rooms where possible, particularly first floor rooms that benefit from the prevailing cool southerly breezes. All first floor windows have electrically operable external shading to block out unwanted summer sun.

Materials
The front half of the existing house was retained for its embodied energy and retrofitted with new insulation, double-glazed windows and window furnishings. The ground level has a concrete slab to provide thermal mass to help maintain stable internal temperatures. The new addition is lightweight construction, timber stud frames and timber cladding with two layers of insulation in walls. All windows are double-glazed with low-E coatings. The external timber is charred blackbutt and silvertop ash battens to the pergola.

Flooring
The timber floors in the front half of the house are Vic ash in chipboard with a foilboard insulation. The stair is Vic ash. The clear-sealed concrete floor slab in the extension is ground and polished with a water-based finish. The upper level floors are covered in 100 per cent wool carpet over 25-millimetre chipboard sheet flooring and insulated where cantilevering.

Water tanks
Rainwater from all roofs, where practical, is harvested in a 5000-litre Kingspan Slimline Tank which provides water for toilet flushing, washing machine and garden irrigation. The tank is above ground and is intentionally a prominent yet subtle feature in the garden design. 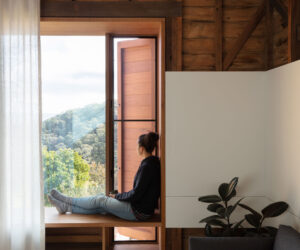