The clients and their guests love basking in the sun on handcrafted banquettes enjoying garden views in ‘Air BNB corner’. The rear garden is now awash with colourful pot plants atop herringbone brickwork made by realigning linear originals. Deft manoeuvring of the butterfly roofline creates angular frames below for the bedrooms’ treetop views. Even on the double-storey western side, the roof’s expansion and contraction minimises bulk in an upper-storey set back from the street. The butterfly roofline start low on the eastern side and opens up along the west side to ‘greet’ a double-storey neighbour. The unusual roofline and extensive glazing create a constant play of light and shadow across textured surfaces. A long, skinny, single-storey Edwardian weatherboard disconnected from light and garden has shape-shifted with a 10-fold butterfly roof.

Architect Sally Timmins of Timmins+Whyte Architecture and Design concedes she’d never designed a butterfly roof when she pitched it to her friends Nokky Sodsai and Ben Gayler as an elegant, playful solution to multiple challenges posed by their tight block in a pretty street in Abbotsford, in Melbourne’s inner-city.

The flexible form could compress and expand exactly where required to connect a voluminous new rear living space to the north-facing garden, minimise a discreetly setback upper storey from the street, and harmonise the entire home with the single-storey neighbour with which it shares an eastern boundary wall and a double-storey home to the west.

Internally, its multiple, delightfully leaf-like folds would start low on the east and open up expansively to the west and rear, creating abundant light and generous volumes within a compact footprint. In combination with extensive glazing including louvres and openable skylights, it would animate the space with fresh air, an ever-changing wash of light and shadow-play. Finally, it would allow dynamic views to the courtyard garden and established trees in the immediate vicinity.

Nokky and Ben’s emphatic ‘yes’ to Sally’s experimental roofline and a design developed within weeks of briefing speaks volumes about the trust between architect and clients. Everyone mentions it at various points and, not coincidentally, comments on the fun they had working together. It shows.

Sally says a detailed briefing process and the constraints of the long, skinny block also helped the trio arrive swiftly at a satisfying solution. “We don’t get blank canvases in the inner-city,” she says. Great builders in Encore Projects and Ben’s construction know-how were also a bonus. “In a previous life, Ben worked in construction so he was interested in every part of the build – as much as we were,” Sally recalls. “The builders were enjoyable to work with and really just sailed through, which is great for any clients but especially with the added pressure of working for friends.”

Nokky admits with a laugh she didn’t share Ben’s fascination with the minutiae of the build, but says his understanding of the process made for a relaxed project. “We didn’t freak out when there was a lot of things we had to decide on,” she says.

“If you don’t have that experience or confidence you could be so stressed.”

The functional brief was straightforward. Retain the original façade, front room and an exposed brick feature wall along the eastern boundary with its lovely texture and warmth. Add a bedroom for Nokky’s daughter, Siena, a flexible third bedroom/multipurpose room, a second bathroom, as much storage and insulation as possible, solar power and rainwater tanks. And open the dark little place up to the garden and northern light.

Timmins+Whyte moved the side entrance to the front and created an elegant entry with sightlines straight through to the rear greenery. Curved joinery introduces an elegant, functional feature that unifies spaces throughout. The architects transformed the original front room into a well-insulated multipurpose space used variously as a study, sitting room or guest room. They concealed the laundry in a skylit, Peninsula Hot Springs-esque bathroom of stone and wood, whose tall vanity is mirrored inside and out for easy angling while hair-drying. It’s the kind of considered detailing that abounds in a delightfully functional home.

The brick-lined hallway opens up at the left to a timber staircase and a concealed server room Ben gleefully nominates amongst his highlights. Odd, but I get it. IT, storage and services are everywhere and nowhere – cleverly concealed inside and out to focus the eye instead on crisp detailing, exquisite light, leafy views and the spare palette of warm, natural materials.

The unusually dynamic stairwell is ventilated from above by an openable skylight and side-lit by an elevated stained-glass window awash with greens and golds. Designed by Sally and beautifully handcrafted by Mick Thomson of Arkson, it also screens out the double-height house to the west. ”It’s another way we’re playing with light,” Sally says. “It changes all day and dances across the plaster wall, injecting colour as well.” Ben recalls the tricky space as “probably our biggest design element to solve.” The trio briefly considered timber slats before hitting upon “art that hangs off the wall, and gives us privacy.” Upstairs are the master bedroom and Siena’s room, both with angular vistas across the streetscapes and treetops of Abbotsford. Ahead is the compact kitchen with vast entertainer’s island bench. The kitchen opens up expressively through the multiple folds of the timber-lined butterfly roof, triangular shards of clerestory window and massive glass sliders into an almost double-height dining and living space. It’s lined with tactile joinery of Tasmanian oak quad and flooded with light and borrowed views from the courtyard beyond.

An alluring mix of potted plants, lush garden beds and raised planters packed with edibles, the garden features a fire pit and herringbone brickwork made by rearranging the linear originals. Created by Nokky during Melbourne’s long lockdown, it’s a suitably serene space now attracting half a dozen species of native birds including tawny frogmouths.

Not surprisingly, Ben and Nokky’s favourite pastime is reclining on the handcrafted banquette to gaze out at the garden – anytime, really, but especially in the early morning light. “We call that corner ‘Airbnb’,” Nokky says. “Everyone who comes over loves it too.”

The design provides comfortable living with low energy use year-round. The house is oriented north with double glazing making up most of the façade. The height of the glass and the upper triangular windows to the north and west means that natural light illuminates the rear living and kitchen space all day. The low winter sun and height of the glazing means that the deeper part of the space has direct light. In summer the eave at the rear, a deciduous tree and the neighbouring double-storey house protect the interior from too much sun. Windows and doors are positioned for effective cross-breezes including louvred windows, which allow a larger aperture than most windows. An openable Velux skylight with double glazing and rain sensors above the stairwell expels rising heat at the upper level. Fixed skylights in the entry and over the kitchen light the two places inaccessible for windows. This means artificial lighting is generally not required anywhere in the house during daylight hours.

The ground level has an insulated concrete slab for thermal mass. The main volumes are highly insulated and of lightweight construction. The butterfly roof has an expressed laminated beam and Tasmanian oak lining boards. Windows and doors are timber framed with double glazing and comfort glass.

The polished concrete slab is a Hanson decorative mix. Wool carpet is used for acoustics and insulation in the bedrooms. Engineered flooring from WOODCUT with a pre-treated solid timber veneer is used for the stairwell and landing.

Passive solar design features including northern orientation, external shading and effective cross ventilation reduce the need for heating and cooling devices. A ceiling fan is used in the front room. In winter, extra heat is provided by hydronic panels. There is a split system housed in the kitchen joinery for the week or two of intense Melbourne heat over summer that it may be required, however the clients understand how to use ventilation with windows and skylights as the first option.

The house uses low-energy and LED lighting from About Space Lighting. All lights are dimmable and switched separately in order to limit use and to create lighting for different experiences of the space. The track over the island and banquette is magnetic, so light fittings can be moved by anyone simply by clicking them in and out (no wires). During daylight hours, most rooms are well lit with natural light and require little to no artificial lighting given the orientation, window positions and skylights. 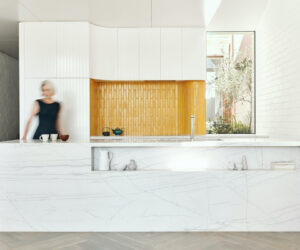