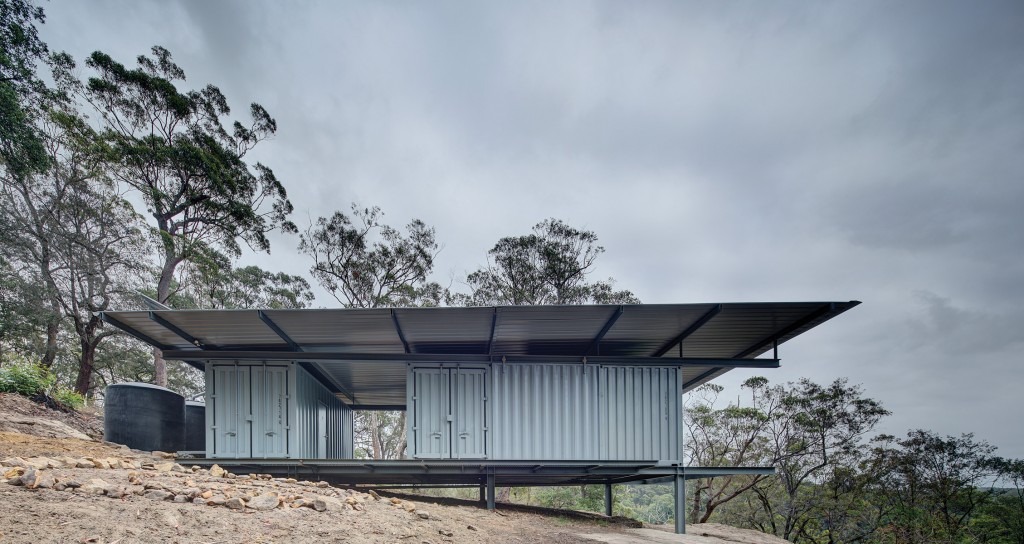 Award-winning architect Drew Heath’s take on the shipping container as a house has plenty of design and a lot of nerve.

Ever since this simple yet elegant building, which features three modified shipping containers, began attracting publicity, architect Drew Heath has been fielding a steady stream of enquiries. Those who dream of an affordable and secure weekender are attracted to what appears to be an easy, low-cost solution. Truck a couple of containers to a site, set them up on some footings and, hey presto, you have a house. But as Heath is quick to point out, it takes a bit more effort to turn the humble steel shipping container into a usable, habitable space.

“What people don’t realise is that while you can buy a shipping container for around $3000 it’s an un-insulated metal box that takes some adaptation,” he says. “There are some things that are really great about shipping containers, such as they are a basic, off-the-shelf unit that’s good for stacking, security and fire resistance, but if you list the tenets of architecture from one to ten – interesting plan, change in level, things that relate to landscape or view, etc. – you’d get down to seven or eight before containers even got a look in.”

So why then did last year’s winner of both major state and national residential architecture awards go ahead and design a building using three recycled shipping containers?

“The client wanted to do a container building and I thought, well, maybe … ” admits Heath. “A lot of architects have a crack at them. Sean Godsell did ‘Future Shack’ which was a beauty, and I guess I was inspired by its big roof. I realised with this project we had to keep the containers out of the sun: that is, dumb metal box needs roof – first step. I’m always trying to push the boundaries with everything and here we are pushing the boundaries of demountable structures as a building.”

The building site, on a bush-covered property a couple of hours north of Sydney, chose itself. A large slab of weathered sandstone on the edge of a slope provided the perfect platform. Three pairs of slender steel posts were bolted to the rock to support two rails. The containers, which had already been fitted out in a warehouse in Botany, were then craned into position and placed parallel to each other in a neatly spaced row, with a lightweight metal skillion roof overhead.

“The building’s exterior is entirely steel,” says Heath, “every part of it – the side decks, the roof, the cladding, the structure. The idea was we had this tough exterior but we’d make the interiors warm, so they are completely lined in plywood sheeting.”

The first container, with kitchen facilities built into either end, faces the view, which is only fully revealed when one side wall of the container is lowered to form a deck. “There’s great excitement when that happens,” says Heath. “The door totally closes off the space so when it drops down, allowing you to go out to a view where you’re hanging over a cliff, it’s kind of edgy and exciting.”

The three-metre wide void between the first two containers serves as a breezy dining space, which can be closed off with sliding doors at either end. The middle container houses three simple bedrooms, one on a mezzanine floor that’s accessed by a set of alternating tread steps, while the third container comprises a plant room and two bathrooms — ‘one for girls and one for boys’ — the clients’ only specific request. They are keen down-hill mountain bike riders and the building is intended to act as a base for visiting fellow- biking enthusiasts, hence its name, ‘Outpost 742713/9’, which is the number stamped on the containers.

With a tight budget the interiors were kept simple. Plywood offcuts were used to construct built-in furniture and to conceal light fittings, the kitchen bench tops are cement sheet with splash backs in folded flat Zincalume, and the bathroom fitouts are basic but, in Heath’s words, “a bit of fun”, with exposed plumbing. Small details, like the canary yellow rollers on the top-hung sliding doors and the two fine lines of LED lighting that slice across the kitchen and dining area ceilings, give the fit-out zing.

The building’s remote location requires it to be self-sufficient. Rainwater is collected from the 180-square-metre roof into three 5000-litre tanks which sit immediately behind the building. Cooking facilities and hot water run off LPG gas. Photovoltaic panels on the roof and batteries power lighting, the fridge and gadgets, and all sewage is treated on site.

The only energy-guzzling item is the drawbridge deck, which operates on hydraulic rams concealed behind the steel-framed kitchen joinery.

“The drop-down door takes the most power,” concedes Heath. “If you opened and closed it a few times you would drain the batteries, but as the power comes from the sun it’s not too bad. If the door gets stuck, you just have to sit and wait a couple of hours … ”

Passive energy design
The building is orientated to the north with the living spaces given the most solar access. The entire building is covered with a massive roof that overhangs the steel container units to protect them from the sun. The containers are opened up on many sides for ventilation and solar access.

Materials
The building is all steel frame due to its location and transportability. Members are kept to their minimum and the structure is very fit. A small amount of concrete is used to anchor the building and in some places it is bolted directly to the rock.

The interiors are virtually all a plantation grown hardwood plywood, this includes the floors, walls, ceiling and joinery. Finishes are kept to a minimum, bathrooms are untiled and just waterproofed.

Insulation
The containers are insulated with a layer of 20 mm foil board between the steel exterior and the 20 mm plywood interior.

Heating and cooling
The building is protected by its large overhanging roof. The containers can be opened in many ways with drop-down, sliding and swinging doors that allow easy ventilation. The small scale of the building requires very little heating. Each space has its own wind driven roof vent for heat extraction and aiding ventilation.

Water tanks
7 Rainwater from all roof areas is directed to three 5000-litre black plastic tanks, which provide all water requirements.

Sewer
All sewerage is treated on site in an above ground wet composting system.