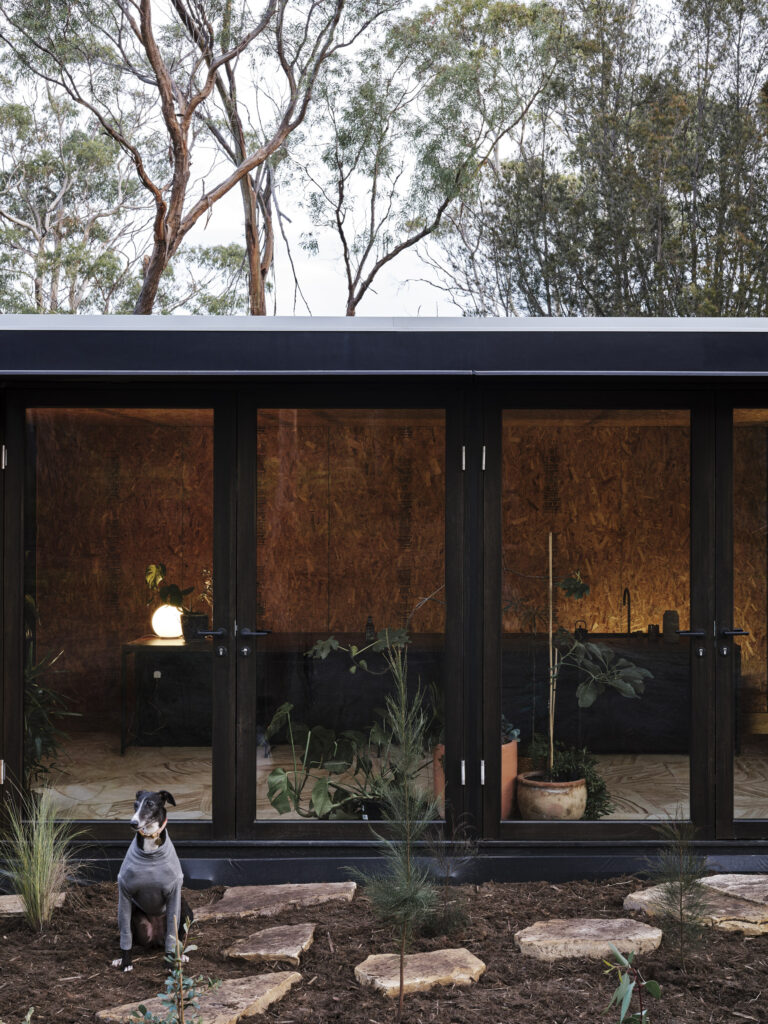 A Tasmanian couple has designed and built a relocatable, off-grid home to tide them over while waiting to buy the right piece of land.

Josh FitzGerald (a founding director of Archier), and his partner, Millie Ashton, began their Casa Acton project with a question: house or land? After the sale of their apartment, the couple had the resources to invest in only one of the two. Being quintessentially Tasmanian, they chose to wait for the right piece of land; however, that didn’t solve the problem of them needing their own home. At the time, Josh and Millie were renting a poorly oriented, single-glazed and uninsulated caretaker’s cottage. “In the winter, it was colder inside than out,” says Josh. Spurred on by the prospect of another winter, Josh and Millie decided to use part of their savings to build a relocatable home on the bushy outskirts of Millie’s family farm, south-east of Hobart. The couple wanted a simple structure, designed to be moved, adapted and added to when they found their piece of Tasmanian landscape. Casa Acton “is one beautifully cut and well-positioned sandstone step up from a caravan”, we joke, as Josh describes the project’s beginnings. Over the two-year construction period, the budget doubled but includes the fixtures, fittings and landscape work – exceptionally good value for a project of this quality and comfort.

Casa Acton oscillates beautifully between pragmatism and passion. The rectangular envelope is constructed of structurally insulated panels (SIPs), a building method Archier has used previously, to great effect. Josh and Millie chose the SIP system for its precision, speed of assembly and aesthetic quality. The interlocking panels took two days to install by hand. Josh, with help from Avalon Design & Build, coordinated the onground manoeuvring and fixing. Externally, the SIPs are clad with locally-sourced, rough-sawn Tasmanian blue gum. The board and batten profile adds depth to the façade, while the green untreated timber has already begun to fade to grey, melting into the coastal bushland. Internally, the SIPs are left unpainted. The overlapping, basket-like texture of the oriented strand board (OSB) wraps the walls and ceiling, giving off a honeyed glow. Once inside, the eye is immediately drawn to the sandstone floor: it’s so luscious and soft and unexpected … it floors you! In contrast, the black kitchen joinery recedes, concealing appliances and creating a matte canvas for reflection and shadow play. The overall effect is one of warmth and retreat.

The 52-square-metre floor plan is refined and unequivocally open. Josh has cleverly employed changes in floor level and materiality to articulate each space, enabling the removal of doors and walls almost entirely. Josh and Millie’s extensive collection of indoor plants create a verdant enfilade, drawing the eye along the length of the room. Conversely, the glazing is positioned to frame the oblique views to the native garden, and bushland beyond. The full-height glazing works to feather the edges and disrupt the sharp lines of the structural system.

Casa Acton is undoubtedly modest, but also luxurious in the most elemental sense of the word. Josh’s design capitalises on the site’s northern aspect; sunlight streams through the double-glazed windows, heating the thermal mass of the floor. Rosie and Frankie, the couple’s greyhounds, bask on the warm floor, testament to the house’s impressive 8.4-star energy rating.

Casa Acton displays a clarity of design thinking that transcends scale. Every decision, from the siting of the house, down to the glaze on the hand-thrown Lindsey Wherrett basin, has been carefully considered. Wherever possible, Josh has sought to experiment and collaborate, to create a cohesive outcome. The brass tapware, for example, was developed in partnership with Wood Melbourne. The result is refined and sleek; the taps are recessed into the benchtop, becoming a part of the surface, rather than an accessory applied to it.

For Josh and Millie, Casa Acton is a labour of love. “There are 1000 things I could change, but I wouldn’t change a thing,” says Josh, while pointing out the small discrepancy between panels, slight shrinkages in the timber benchtop and a shallow dip in the sandstone floor. All of which are the by-products of Josh’s experimentation and testing and together tell the story of an architect who not only designed his own home, but built it too.

Passive energy design
The house is oriented north with expansive double glazing to maximise solar gain during the cooler months. Fully insulated floor, wall and roof panels create a high-performing envelope of 8.4 stars. Sandstone slabs are warmed by the low winter sun, but protected by an eave in summer, helping to keep a stable temperature day through night. Smaller windows to the south and west limit heat gain and loss, with an operable tilt-turn providing passive ventilation.

Materials
The floor, wall and roof structure is made from structurally insulated panels (SIPs) from Fenster + Panel, creating a high-performance envelope. Resting on steel posts and beams, the panels were installed over two days. Cutting away the foundation’s temporary welds and bolts will allow the house to be moved in due course. The house is clad with sustainably-sourced local blue gum timber. Rough sawn and green, it was installed using the traditional batten and board technique, allowing it to move as it settles in place. Unfinished, it has already begun to show its age, greying off where it is most exposed to the weather, with remnant golden-brown areas where protected. The bathroom floor and walls are clad with slate tiles from Eco Outdoor. The low-lying island bench, used for both kitchen preparation and dining, is made from spotted gum timber benchtop with Whittle Waxes “Evolution” oil finish. Appliances from Fisher & Paykel. Matte black laminate fronts with Blum “LEGRABOX” hardware. A spotted gum benchtop with powder-coated steel legs and matte black cabinets are more evocative of a farmhouse dining table than a dominating island bench. Tapware by Wood Melbourne.

Flooring
The floor is made from 30-40 millimetre sandstone slabs from Timber Stone Tasmania. Sourced from the central highlands of Tasmania, it was laid over the course of nine months. It has been finished with Lithofin Stain-Stop, a waterbased penetrative sealer that is practically imperceptible, maintaining its naturally raw appearance. A mid-toned sand cement grout has been chosen so not to distract from the character of the individual pieces.

Glazing
Hardwood timber windows, French doors and tilt-turn have been sourced from Binq. A black oil finish and black handles allow you to focus on the view. AGG “iPlus LowE” high performance toughened double-glazing has been used. A textured glass window to the basin provides privacy whilst allowing a dappled view of the garden.

Heating and cooling
The building’s orientation, high-performance envelope, operability and thermal mass negate the need for any permanent form of heating or cooling. Heating, which is only required in the depths of winter, is provided by a portable electric room heater, whose power consumption is covered by the solar and battery system. A Stiebel Eltron decentralised heat recovery ventilation system provides the house with fresh air whilst maintaining room temperature.

Water tanks
Whilst the house is currently connected to mains water, the roof drainage has been designed so that when moved it has a single connection to a water tank – allowing it to be fully self sustaining.

Energy
The house is connected to a solar and battery system, with a backup mains connection as energy consumption is monitored.