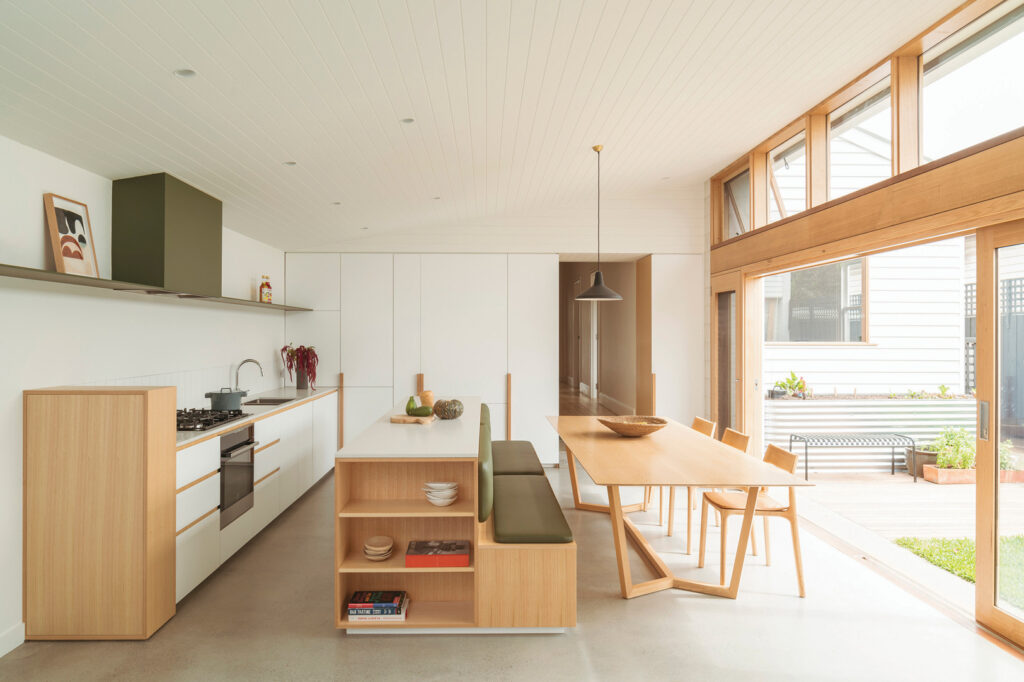 Carefully crafted joinery like this integrated island and dining bench are integral to functionality. An initial plan placing a master suite at the front was knocked back to preserve the heritage-listed façade. The play of light throughout the day, particularly in communal areas, is a project highlight for the architect. 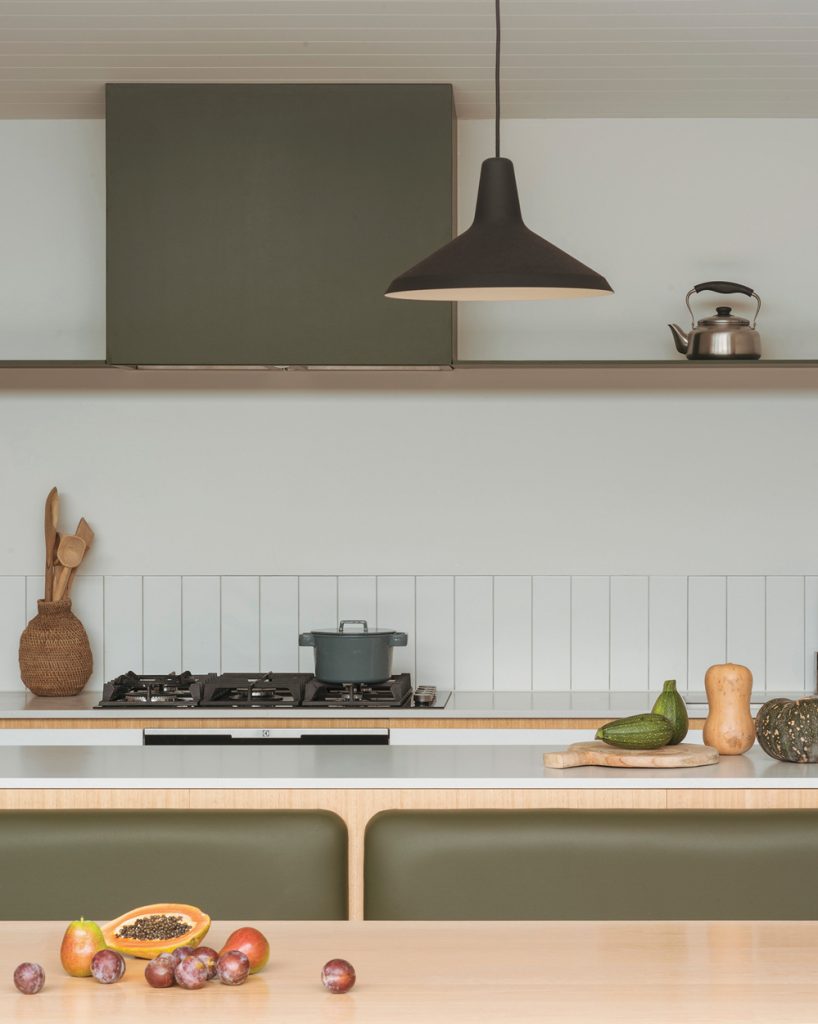 The owners concede they took some convincing about the kitchen/ dining area’s splash of green, which they now love. The addition performs well enough spatially and energetically for the clients to keep it open for much of summer. The owners of a compact home in Kingsville, Melbourne knew their draftsman’s plan was NQR, and turned to Olaver Architecture for a calm, minimalist, low-energy, indoor-outdoor home.

Pre-schooler parents crave quiet and calm with a fervour that borders on the religious (or was that just me?). Regardless, when clients Pat and Maddy Miller briefed architect Emlyn Olaver in early 2017 on an addition to their Edwardian cottage in Melbourne’s inner west, their priorities were sustainability (Pat works in the field), natural materials, outdoor connectivity, a minimalist aesthetic and a feeling of quiet serenity – energetic daughters, overhead flight path and nearby major road notwithstanding. “We wanted it to be somewhere we could live with these girls until they’re kind of ten-ish without it being cramped,” Pat says.

Three bedrooms and garden space were essential. The couple’s preference was to build around a beautiful jacaranda tree at the east-facing rear. They initially engaged a draftsman but knew his plan didn’t quite work, and turned to Emlyn for a fresh take on the compact, 108-square-metre home whose 90s renovation had rearranged its core. Amongst the other challenges of the project were a modest budget, limited northern exposure on a site of just 276-square-metres, adjoining neighbours on the south side, and heritage restrictions making change to the façade very tricky indeed.

Emlyn wasn’t fazed. “Being personally in a similar situation to them with young kids I felt some kinship and understanding of what they were after and what they were going through,” he says. “It was a perfect job for us.” Council knocked back an initial plan that saved the jacaranda by locating a new master suite at the front of the block. Take Two moved the master suite to the rear, and while Emlyn and Pat still mourn the loss of the jacaranda and a sizeable chunk of garden they concede this iteration functions better.

“We definitely prefer this one,” Pat says. “We would have got a bigger backyard but through the way Emlyn constructed this one we got a fourth room and we both work from home a day or so a week so we have a study, which also makes [the house] feel a bit bigger. And the difference between the backyard being 50 per cent bigger and not – it was always going to be a small backyard. We were not going to be kicking a footy in it.”

Emlyn’s design reconceives Pat and Maddy’s home as a modernist-inspired courtyard house with minimalist joinery for uncluttered warmth and functionality. At the front, two original bedrooms were retained and updated (with ceiling fans added for air flow). Emlyn reinstated and added joinery to a central hallway, created a light-filled bathroom off to one side, updated a laundry on-the-cheap with store-bought cabinetry topped with a Victorian ash bench, and transformed a 90s kitchen-dining area into a study/guest room with generous glazing and lovely views to the courtyard garden opposite.

The rear addition opens expansively into a sun-drenched kitchen-dining space, which connects to the courtyard opposite via massive glazed sliders topped with highlight windows (shaded in summer from harsh sun). Clever central joinery combines an elongated island bench and integrated dining suite. Subtle green accents on shelving and seats add colour to a deliberately restrained materials palette that reflected the owners’ aesthetic approach and helped keep cost and clutter to a minimum. A cavity slider between bedrooms and dining space means the adults can enjoy noisy dinner parties without disturbing sleeping kids.

Beyond the dining space are a central living area with more clutter-minimising timber joinery and a master suite opposite the study that opens onto the ever-present courtyard garden.

The renovated home is still just 155-square-metres, but far more enjoyable for this family of four. Insulation and zoning make the place as airtight and peaceful as Pat and Maddy hoped for. The craft and care of Inner West Joinery and builders, Frameworks is obvious. The house uses very little energy, even in winter, and is packed with inexpensive little practicalities like old-school winder blinds to keep glazing cool and hinge doors with fly screens to allow the rear to stay open for much of the warmer months. Clever window placement makes the ever-changing interplay of shadow and light a constant treat. “In the end it’s a pretty straightforward approach to what is a small and in some ways difficult site with the [east-west] orientation and everything,” Emlyn says. “It’s just good planning more than anything else. We made good use of the site.”

Passive energy design
Living spaces are orientated to the north and feature large Victorian ash timber sliders with highlight windows above. Shading is provided by an eave and external blinds over the windows, which blocks harsh summer sun and allows winter sun to penetrate into the living spaces. Windows and doors are positioned for effective cross-breezes. Insect screens on highlight windows and some of the lower openings make them practical to use for longer. The design provides comfortable living with low energy use year-round.

Materials
The ground level has a concrete slab for thermal mass. The lightweight cladding and concrete block are highly insulated. Windows and doors are timber-framed with double glazing.