Embedded into and emerging from the topography of the site, the house has an extensive rooftop garden with native scrub inhabited by insects and birds. A wood-burning open fireplace surrounded by a rich palette of cedar timber linings and battening. An arguably unorthodox kitchen layout, which prioritises cooking with a view. This and the semi-detached living room is a welcomed departure from the typical open-plan arrangement which for whatever reason has become a default characteristic of contemporary Australian homes. With a sun trap to one side, this almost self-sufficient detached guest suite with a private entry was initially the architect’s suggestion. The cantilevered form of the upper level is flanked on either side by a pair of projecting wing walls focusing views oceanward. Adjacent to a spectacular unobstructed view of the ocean is a timber-battened juliette balcony, with a door opening for night-purge ventilation. This beachside weekender remembers the previous house on the site and, as a home for a beautiful art collection, pays homage to the First Australians who walked this land.

Out of sight, the ocean is heard lapping at the dog beach shoreline. A muffled sound beyond the tree line. A corten steel gate with the word ‘Always’ welded on it has been left ajar.

It is here on this site, some four or five years ago that Julie commissioned architects Kennedy Nolan to design a beachside weekender. Initially the design brief was conceived around the conservation of an existing house designed by Chancellor and Patrick – renowned mid-century architects who were responsible for the seminal McCraith House, commonly known as the Butterfly House. “Our attempts to preserve and restore the house were thwarted by the structural necessity to place it on 15-metre-deep piles, without which the house was in real danger of sliding onto the beach,” explained the architect Patrick Kennedy. As it happens, the existing structure was in such a state of disrepair, the local council had it condemned.

Left with precious few options but to demolish, rather than imagining the site as a blank slate, the architect instead sought to ‘remember’ the previous home, by arranging and organising the floor plan based on the original Chancellor and Patrick design. However, that’s not to say the design response was a faithful reproduction, nor was it intended as such. A cranked perpendicular upper-storey was introduced, connecting the house with the main vehicular access path. Ageing-in-place is made possible with a lift, and wheelchair access is carefully considered at steps, level changes and thresholds. With a staggering eight to 10 metres cross fall about the land parcel, the upper-floor appears to be partly submerged in soil, as if anchoring and grounding the structure.

It would seem the more conventional beachside architectural solution in the local area is to disregard the natural context of the site and simply stick a glass box on top of the hill. In contrast, this house emerges from and is an extension of the landscape. An extensive green roof design is made possible with a concrete slab structure, punctured with the odd circular skylight, each of which act as a sort of two-storey daylight snorkel to bathroom spaces located deep within the floor plate. With succulent branches dangling and overflowing the folded concrete parapet, the resulting soil bed is not only a super insulative roof build-up but a vessel accommodating a biodiverse body of ground cover and scrub species.

Tempering the concrete superstructure is a skin of hard and softwood timber, used in various formats as linings, claddings and battens. In what is perhaps a subtle nod to mid-century design, darker tones of timber were selected over the more typical, and aesthetically safer, washed-out species. Along with the crackling sounds emitted from the open fireplace, the living room is immersed in the unmistakably rich aroma of western red cedar reminiscent of a cosy ski lodge.

Responding to local weather patterns such as the direction of prevailing winds, the occupant is able to feel comfortable both in summer and winter with only the smallest of behavioural adjustments. Along with clear paths of cross-flow ventilation and separate private open spaces either side of the main living areas, the home is designed for seasonal living. Here, at the boundary between building and garden, forms the low resolution outline of outdoor rooms. Some leeward and others places of refuge.

“One of the best things a person can do for the soul is walk your dog on the beach,” reflected Julie whilst looking up at a photograph of a panting golden retriever. “That’s King Harry, he sadly passed away not so long ago.”

Apart from walking the dog along the shoreline, up until recently, Julie described her morning routine as one which begins with a dip in the ocean. A ritual completed with a quick icy shower, tucked around the side of the house. Along with a few stone walls, the copper shower head and tap faucets were reclaimed from demolition of the original home.

Discussing how she approached her design brief for the architect, Julie explained that it had little to do with a number of bedrooms or bathrooms. Instead, the brief was more so focused on key qualitative outcomes.

“It was a team effort,” says Julie with regards to outlining the brief. “I said, ‘Let’s see if we can retain as much of the existing site as possible.'”

To Julie, building on this bit of land came with an environmental and historic responsibility. In every corner and wall of the house are otherworldly works, the sum of which amounts to a significant collection of First Nations art, including a most beautiful painting by Mrs N. Yunupiŋu, a Yolŋu woman from Yirrkala in Arnhem Land.

Turning around to depart from the house, one walks through that same steel gate with the word ‘Always’ welded within a circle. The gate was the work of Jacob Nash, theatre set designer of the Bangarra Dance Theatre.

In an isolated yet relatively short time since the first European settlement of these lands, it is all too easy to perceive change as linear. Yet, as the art in this spectacular house would perhaps indicate, those who walked the land before us did so across a different time scale and, in doing so, recognised that change does not take place in a line but in something different entirely.

The house is mostly oriented to the north-west in order to encapsulate the view to the beach below and the northern sun. As a result, a large overhang above the living and kitchen spaces was incorporated in order to provide adequate summer shading. In winter the sun can penetrate well inside the living room through the glazing, and minimal openings were included in the south façade to minimise heat loss. The green roof acts as a natural insulator, contributing to the home’s passive design. Terraces and decks on the east of the house along with operable windows throughout allow for cross ventilation.

This landscape, created with regular collaborator Amanda Oliver, is designed to surround and conceal the built form. The landscape is characterised by zoned, distinct planting choices, with diverse orientations and degrees of privacy. The house will ultimately disappear as the planted roof merges with the swathes of indigenous plantings presenting instead an imagined, idealised Australian wilderness – an uncanny hybrid of the natural and cultivated.

The main volumes are highly insulated. Retaining walls are comprised of blockwork. The interiors are comprised of blackbutt/western red cedar ceiling battens and vertical western red cedar cladding on the walls. These timber claddings provide a warm, natural grain and improve the acoustic performance of the house. The use of these claddings with masonry render and tiles in wet areas minimises the use of plasterboard and cement lining products where possible. Paints used are low-VOC. External finishes include rendered masonry by TCM Colour in “Sand” finish, stone-clad walls from Rocks Plus and horizontal blackbutt cladding that is designed to grey-off over time. The roof is comprised of aluminium in an antique copper finish, with granite gravel on the sedum roof. The planting of the roof over time along with the greying of the timber cladding ensures that the house softens into, rather than juxtaposes, the surrounding landscape.

The flooring across the home consists of all natural products, including slate tiling in the main shared areas and sisal in the bedrooms. Natural slate tiles are employed for practicality in high traffic areas and to make a visual reference to the earth. Sisal flooring is used in bedrooms and secondary living spaces for a softer feel and acoustic performance, and was chosen for its renewable, sustainable and biodegradable properties.

Glazing is oriented north-west for winter sun, and external shading during summer is provided by an extensive eave over this glazing. Minimal openings in the south façade reduce heat loss throughout the year. Heating and cooling are powered by electricity only, as there is no gas on site. A hydronic heating system with radiator panels is installed to heat bedrooms when required. Conventional brick open fireplaces are installed in both living and sitting rooms for extra heating when required.

Energy to the home is supplied through a 7.1kW solar system. 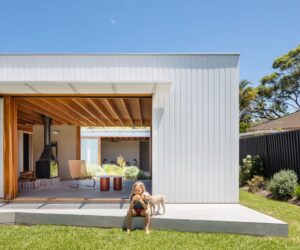