Models of, and objects from, 10 sites in the French Pavilion's Infinite Places. Sean Godsell Architects' chapel in the woods on the island of San Giorgio Maggiore as part of the Chapels of the Holy See. Island, on the roof of the British Pavilion. MAP Architects' chapel in the Chapels of the Holy See. Norman Foster Architects' chapel focused its view on the sea beyond. Vo Trong Nghia’s bamboo stalactite in the grounds of the Arsenale. John Wardle Architects' Somewhere Other plays with perspective and reflection. 10 000 plants from 65 different grassland species in the Australian Pavilion.

Humanity and architecture intersect and intertwine at the 2018 Venice Architecture Biennale.

When Irish architects Yvonne Farrell and Shelley McNamara shared their chosen theme of Freespace for the 2018 Venice Architecture Biennale they explained: “Freespace describes a generosity of spirit and a sense of humanity at the core of architecture’s agenda, focusing on the quality of space itself.”

When we visited the Biennale in June not long after its opening, a steady yet dispersed stream of people allowed for a peaceful and focused study of the 30 permanent national pavilions, the vast halls of the Arsenale and the Vatican Chapels in the woodlands on the island of San Giorgio Maggiore. Responses to the theme addressed a diverse range of issues of a political, social and environmental nature.

Within the grounds of the Giardini, the French pavilion’s Infinite Places looked at 10 sites, most starting as neglected or abandoned, which have evolved through community rather than architectural intervention. Models of the sites lined the room, with timelines pinpointing the political and social activity that influenced the evolution of the spaces.

In stark contrast, in the cool, peaceful interior of Sverre Fehn’s 1962 Nordic pavilion, Another Generosity questioned the relationship between nature, humans and the built environment. Cellular structures quietly expanded and contracted in response to the levels of carbon dioxide in the air while gently changing colour to indicate temperature differences.

Subtle placement of scaffolding and stairs tucked to the side of the British pavilion revealed Island, a public gathering space on its roof. Beneath, the empty pavilion had been given over to a program of talks and performances on topics relating to migration and decolonisation; language and borders; and isolation from and identity surrounding buildings and landscapes.

Australia’s contribution, Repair, curated by architects Mauro Baracco and Louise Wright, along with artist Linda Tegg, filled the pavilion with fragile native plants which over time would thrive or struggle, as in their natural environment. Deeper questions of restoration were revealed via a series of videos of 15 projects projected dramatically onto the walls of the pavilion. They looked at the integration of built and natural systems to restore the land but also the social, cultural and economic landscape.

Over inside the buildings of the Arsenale further installations by countries shared space with offerings by selected architecture practices from around the world. Mumbai architects Case Design demonstrated the materials and ideas behind the passive cooling system used in their Avasara Campus for girls. The rudimentary framework enabled a process of dialogue and collaboration for all who participated in the process of building and this was beautifully shared through their installation.

The finely-crafted work by Australian practice John Wardle Architects used frames and portals to draw the viewer in to the architecture where films of the Australian landscape had been made to create intimacy, intended as a long lens between Australia and Venice.

Outside, Vietnam’s response to the theme, Vo Trong Nghia’s bamboo pavilion epitomised the generosity of free space by offering respite from the heat.

A quick water-bus ride across the grand canal delivered us to the peaceful woodlands on the island San Giorgio Maggiore – and to the Chapels of the Holy See, the Vatican’s first foray into the secular culture of the Biennale.

Curator, Professor Francesco Dal Co invited 10 architecture practices to build pavilions inspired by Erik Gunnar Asplund’s 1920 Woodland Chapel in a Stockholm cemetery. “With this small masterpiece Asplund defined the chapel as a place of orientation, encounter and meditation, seemingly formed by chance or natural forces inside a vast forest, seen as the physical suggestion of the labyrinthine progress of life, the wandering of humankind as a prelude to the encounter,” Dal Co explained in a statement. Spread across the forest behind the 400-year-old Benedictine church, the chapels delighted and entranced us.

A visit to the Biennale requires stamina and a great deal of concentration, but if it is well-planned it is an incredibly rewarding experience that offers deep insight into current thoughts on architecture and humanity. 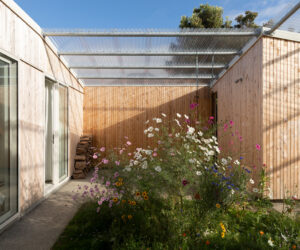