Before 1970, no Yolngu women painted sacred themes on bark or larrakitj in their own right; however, in recent decades, a number of women artists have taken to these media, becoming renowned both nationally and internationally for daring and inventive works that challenge tradition. The NGV has been acquiring important works on bark by artists from Buku for more than two decades, establishing one of the most significant collections of work by Yolngu women artists.

Buku is located in a small Aboriginal community called Yirrkala, which is approximately 700 km east of Darwin. According to the staff at Buku, under Yolngu Law the ‘Land’ extends to include sea, and both land and sea are connected in a single cycle of life which Yolngu people celebrate through their songs, sacred designs and art. Both Yolngu men and women are known for channelling this unique world view into innovative works of art.

The exhibition begins with the significant bodies of work by the sisters Nancy Gaymala, Gulumbu, Barrupu, Nyapanyapa and Eunice Djerrkngu Yunupingu. In this first space, audiences will encounter stories about Yolngu conceptions of the universe, fire, and creation, as well as bold contemporary paintings that explore rhythm, tonality and gesture.

In the second gallery space, visitors will encounter other significant works by artists from the Community. Amongst these are optical illusions by Dhuwarrwarr Marika; waterlilies by Malaluba Gumana; monochromatic stars by Naminapu Maymuru-White; bold visions in pink and blue by Nonggirrnga Marawili and Dhambit Mununggurr; as well as the last produced paintings by the late master painter, Ms Wirrpanda.

A highlight from the exhibition is a newly commissioned large-scale, floor-based work by Naminapu Maymuru-White depicting Milngiyawuy, also known as the Milky Way or River of Stars. Maymuru-White’s work extends across the entire floor of Federation Court and has been developed in collaboration with the NGV. This work is complimented by a multimedia cinema on the mezzanine floor, where audiences can sit and listen to the artist recounting her story of the work, a deeply moving story that is connected to the mortuary rites of the Manggalili clan whose deceased souls are turned into stars.

Three recently acquired bark paintings by Eunice Djerrkngu Yunupingu titled I am a Mermaid will also be on display. These vivid and technicolour paintings tell the story of the artist’s conception. The paintings illustrate how Yunupingu’s unborn spirit visited her father in the form of a mermaid, and how her father tried to spear the mermaid, believing the spirit to be fish. He then fell asleep and upon waking, Yunupingu’s mother confirmed with her husband that she was with child, thus bringing their daughter into the world.

Also on display is a collection of larrakitj, including nine recently acquired ‘pink poles’, painted by Nonggirrnga Marawili. Each of Marawili’s works have been rendered in an arresting array of pink tones produced by mixing recycled printer cartridges with earth pigments and ochre. Signalling a daring departure in both technique and colour, Marawili’s distinctive larrakitj feature the sacred cross-hatched design for the freshwaters of the Djapu clan, whose ancestors hunted using woven fish traps. Marawili’s works are to be presented amongst a selection of larrakitj within a mirrored room, creating the illusion of an infinite grid. Larrakitj were traditionally used by Yolngu people as a type of coffin or bone container placed following a ceremony as a memorial to a deceased person after death.

Tony Ellwood AM, Director, NGV, said: ‘Bark Ladies is a major exhibition that celebrates the NGV’s especially rich collection of works on bark. The exhibition brings together some of Australia’s great singular master painters and we are extremely grateful to each of these artists for sharing their important and sacred stories with Melbourne audiences.’

Sarah Rovis, Managing Director, MIMCO, said: ‘MIMCO is delighted to continue our longstanding partnership with the NGV, by supporting the upcoming Bark Ladies exhibition. This exhibition is like no other, celebrating the diversity and depth of Indigenous Australian culture, specifically highlighting these tremendously talented Yolngu Women. As an Australian Brand, we wholeheartedly believe we have an important role to play in the storytelling of our rich and diverse heritage. We are grateful to be able to showcase, not only these breathtaking works on bark, but also the journeys and stories of the Yolngu women themselves.’

Bark Ladies is presented by the National Gallery of Victoria in collaboration with Buku Larrngay Mulka Centre and is on display from 19 Nov 2021 to 1 May 2022 at NGV International, 180 St Kilda Road, Melbourne. Entry is free. For further information, please visit the NGV website: NGV.MELBOURNE 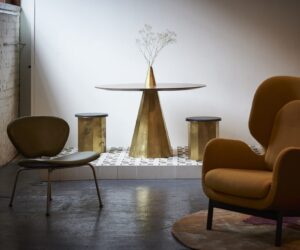